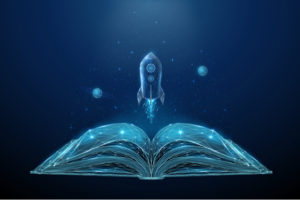 Michio Kaku, “Physics of the Future”

Michio Kaku’s family comes from Japan as his name suggests, but he was born in the United States. He is a futurist, physicist, professor of string theory, thinking about the development of IT and consciousness in the future. Do you think telekinesis and eternal life are fantastic? Michio Kaku writes about the incredible, based on scientific reports of world theorists and practitioners.

If you want a simple look at the future of technology, this book is the best starter. The material is written easily and is not loaded with heavy terms. If you are interested in science but do not know which book to start with, then “Physics of the Future” is ideal for immersion in this complex world.

Michio Kaku has a talent for conveying complex terms and notions in a simple language. He is also very active in social media and on YouTube.  If you are interested you can find tons of his speeches online and learn a lot about not only the future but also modern-day science and physics.

If you want to get a more holistic picture of his bibliography, we recommend reading the author’s other book – “Physics of the Impossible” – which has become a real bestseller in the genre of science fiction.

“Homo Deus: A Brief History of the Future”, by Yuval Noah Harari

To think well, you need to think through and read between the lines. This book by Israeli historian and philosopher Yuval Noah Harari teaches how to think about the future critically. It is a skeptical view or an outline of our entire future world.

Harari’s ideas are provocative: he believes that absolute happiness and immortality will not necessarily bring happiness to humanity. According to him, by using the latest breakthroughs in biotechnology genetics, the rich will be capable of improving themselves continually and create literally a God-like species – Homo Deus. But in the end, such God-like elites and super-powerful AI could decide that other humans are useless and perhaps even harmful. Since such a powerful AI (or better to say cyborgs, as they will be half-human) may realize that the atoms, which make up other people, could be used for other, better purposes known only to them.

We highly recommend reading this work by Harari, because it helps to go beyond the usual thinking and patterns, to expand your understanding of the future world.

By the way, this is one of Bill Gates’ favorite books. He once said that it is full of interesting ideas and written in the bright language. After reading it, you will inevitably think about the future, and thinking about the future means re-thinking the present too.

Ray Kurzweil, “The Singularity Is Near”

The last one on our list, but the most important book we would recommend is the book of the futurist Ray Kurzweil. The person who predicted the emergence of artificial intelligence capable of defeating a person in logic games (Garry Kasparov’s loss to Deep Blue in 1997 was predicted with a one-year accuracy) talks about the development of technologies and the future of humanity.

Ray Kurzweil has come up with a universal evolutionary law, which he calls the Law of Accelerating Returns – each new technology builds on the achievements of the previous technology and becomes much more capable than its predecessor. Ray says that our planet, all its living things including humans and ultimately man-made technology, have been developing exponentially. However, we humans are not used to exponential thinking, as our brains are hard-wired to think linearly. That is the reason it is so hard for us to see the disruptive technological event looming ahead in the near future – the Singularity in 2045. At this point in time, the symbiosis of our most advanced technologies (namely what he calls GNR – genetics, nanotechnology, and robotics) will lead to evolutionary advancement so rapid and so profound, which we are not able to conceive with our current cognitive capabilities.

If you are ready to take a look at the rapidly approaching tomorrow, then be sure to read this book. And for the final decision on whether to read it or not, we will again quote Bill Gates: “Ray Kurzweil gives the most accurate predictions about the future and artificial intelligence of all that I know.”

3 Most Interesting Books to Help You Understand the Future