Posted in EssaysNo Comments on Curious questions: What exactly is a Black Hole? 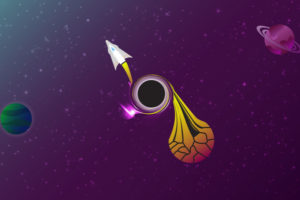 A black hole is a celestial object so massive that nothing, even light can escape its gravity. It is called black because it does not emit nor reflect light. In a sense, black holes are the most ideal black objects that ever existed in the universe. We humans cannot see black holes with a naked eye, but scientists know about their existence thanks to powerful telescopes observing the behavior of stars and other objects in space near black holes.

? All black holes can be classified into three size categories: small, medium (or stellar), and supermassive.

Scientists know about black holes presence by observing nearby objects. Black holes interact with nearby planets and stars and with electromagnetic radiation such as visible light. A matter that falls inside a black hole forms the so-called event horizon – a point of no return, once anything crosses it, there is no escape. As the matter is soaked past the event horizon it can form a superheated disk created by high friction from an enormous rotating mass. This friction produces the so-called quasars – the brightest objects in the universe. Quasars are great indicators of black holes’ presence as they emit high energy radiation observed by scientists using orbit satellites and powerful telescopes.

The existence of black holes was predicted by Albert Einstein’s general relativity theory but was theoretically proved only in the 1960s. But perhaps one of the most prominent scientists meticulously studying black holes was Stephen Hawking – English theoretical physicist and cosmologist known to the large public for his disease holding him crippled in a wheel-chair, speaking with a distinct robotic voice. The so-called Hawking Radiation is a theory that black holes not only attract objects but also emit matter. Though the amount of matter emitted is so tiny that can be compared to evaporation or radiation and can take millions of years until a black hole, put on a diet, can disappear.

Despite significant progress for the past decades towards understanding the phenomenon of black holes, much remains unknown and poses further questions, often mesmerizing. Due to the complex nature of black holes and current technological limitations studying them, humanity is left wondering and speculating. For example, it is estimated that roughly 27% of all the mass in the universe is made up of dark matter. About 68% is attributed to even more mysterious and less studied dark energy. Scientists know about dark energy existence only by its impact on universe expansion. If you do the simple math, you will end up with just 5% for the remaining matter – our planet Earth and everything ever observed in the universe with existing light-sensitive instruments falls into this category.

Just think about it – we live in a world 95% of which we call black, as we neither know what’s in it exactly nor can we look inside to find out ?

Curious questions: What exactly is a Black Hole?