Posted in Self educationNo Comments on Mars exploration – what is roaming this planet’s surface at the moment? 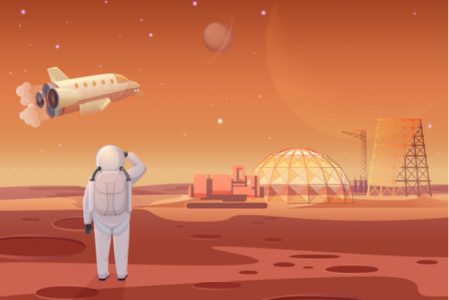 The Chinese-made Zhurong rover for Mars exploration has successfully descended from the landing platform to the planet’s surface. This was announced on May 22, 2021 by the National Space Administration of the People’s Republic of China.

The Chinese rover has arrived at the Red Planet aboard the automatic station Tianwen-1. The successful descent of the landing platform to Mars took place shortly after. Since then, the command team from the mission control center in China has been running a series of operations to test the solar panels, antenna, and sensors. And now Zhurong successfully embarks on its scientific program.

The device is located on the Utopia Crater – a rounded lowland with a diameter of about 3300 km in the Eastern part of the Northern Hemisphere of Mars. The rover is equipped with cameras, a magnetic field detector, ground-penetrating radar, a surface compound detector, and a meteorological measurement instrument. The main research program is designed for three months. If the rover does not have any critical malfunctions, it will continue to function.

With the success of the Zhurong rover, China has become the second country after the United States, which has successfully delivered a rover to the surface of Mars. The rover will, among other things, look for signs of the existence of life in the past or present.

In addition to Zhurong, Mars has two active rovers – Curiosity and Perseverance – both of which are owned by the American NASA, which has landed 10 missions on the Red Planet so far.

On November 26, 2011, the US government sent to the Red Planet a 900 kg rover made by Boeing and Lockheed Martin on an Atlas V 541 rocket. He sat down in Gale Crater on August 5, 2012, and has traveled 23.83 km since then, having already sent about 750,000 photos and gigabytes of other scientific information. Curiosity was designed to spend 23 Earth months on Mars. However, it continues to operate until this day. By comparison, its predecessors, Spirit and Opportunity rovers, which were sent to Mars in 2004, stopped operating in 2010 and 2018 consequently because the severe Martian dust storms have blocked their solar panels.

At the beginning of 2021, Curiosity marked 3000 local days of successful work on Mars. He does not stop sending many photos from the Red Planet, which he takes with several cameras: front, back, side and others.

Now the rover continues to climb Mount Sharp, which it has been exploring since 2014.

American NASA’s Perseverance rover has landed on the Red Planet in February 2021. It became the fifth rover to successfully land on Mars since 1997, and its launch happened shortly after China’s Tianwen-1.

The rover is equipped with several sophisticated sensors and scientific instruments. Its primary mission is to look for signs of ancient microbial life on Mars. In April, for the first time in the history of space exploration, it flew a helicopter-drone in a world other than Earth.

Perseverance is the size of a vehicle. It weighs almost a ton and has 19 high-resolution cameras and two microphones that scientists will use to record sound on Mars.

Scientists also hope the rover, equipped with its own oxygen devices, will help pave the way for future manned missions.

The helicopter drone deserves special attention. It uses counter-rotating coaxial propellers with a diameter of just over 1 meter. It is equipped with a high-definition camera that will allow you to see everything from the “side” of this drone. A wireless transmitter is also installed inside that will transmit information to the rover. Well, he, in turn, will send all this to Earth. A camera with a solar tracker is used for navigation.

In the long term, Perseverance’s goal is to reach what scientists believe to be the delta of an ancient river, which was formed during the “wet period” of the history of Mars. There it will search for the remnants of ancient life on the Red Planet.

Mars exploration – what is roaming this planet’s surface at the moment?