Posted in EssaysNo Comments on Popular Scandinavian Myths: from Odin to Game of Thrones 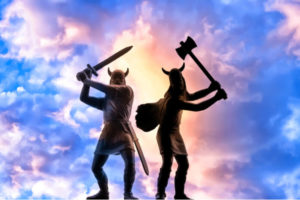 According to the Scandinavian myths, shortly after the world was created, Day and Night had just taken shape and for the first time, the Sun and stars were shining. However, the Gods still had a lot of work to do. They began to make various objects, in particular various things from metals. This is how our civilization was born.

It is at this stage that the Gods decide to create dwarfs. Since dwarfs (gnomes) were underground creatures, they had a special gift of finding, processing, and storing gold, and the Gods were ready to pay generously for their products.

The dwarfs were created quickly. Snorri Sturluson, Icelandic scientist, politician, poet, and military leader of the 13th century, says that they originated in the earth, like worms.

Dwarfs lived either underground or in the mountains, forging metal and making beautiful things.

Many of the Gods’ most valuable treasures were created by dwarfs: the folding ship Skidbladnir, Sif’s golden curls, which replaced the natural hair stolen by Loki, the spear of Odin Gungnir, Thor’s hammer Mjöllnir, etc.

Why People Are Trees

The Gods occupy a dominant place in the world, which they share with dwarfs, giants, elves, and a few monsters – the offspring of Loki and the giantess Angrboda. As long as there were no people in this world, there was no one to make sacrifices to the Gods.

One fine day, the three Gods – Odin, Hoenir, and Lodur – went for a walk, apparently to the sea and on the shore found that there were many fallen trees.

Three Gods got down to business and turned the trunk of an ash tree (Ask) and another trunk (this one is more difficult, as no one knows for sure the meaning of the word “Embla”, although most likely it is an elm) into the first couple of people.

Scandinavian people never forgot that they were originally created from trees. This is expressed metaphorically in many Scandinavian texts: men in them are called “the tree of weapons” or “the tree of battle”. Women were also “trees.” For example, the warrior Brunhild was called the “tree of necklaces.”

Although trees cannot walk, their strength and slenderness, the annual cycle of life, longevity and sudden death from disease, fire, the woodcutter’s ax make them a powerful analog to human existence.

Also, the human population boom can be compared to the growth of the world tree, which grows through the kingdom of the Gods, the human world, and the world of the dead.

Smaug, the dragon in Tolkien’s “Hobbit” book, gets its name from an old Scandinavian word meaning “to sneak,” “to crawl.” Its prototype was the dragon Beowulf, a flying fire-breathing monster.

Like Fafnir, another dragon from Norse mythology, Smaug could speak. He had a long conversation with the hobbit Bilbo, who distracted him with riddles, trying to find the dragon’s weak point (it was under the arm, where the scales had worn off). Bilbo shared this information with the archer, who later killed the flying dragon.

Today, the “Game of Thrones” TV series is very popular, where the threat of the onset of winter is constantly present. And here, the influence of Scandinavian myths and legends can be traced as well.

According to them, at the end of time comes the Great Winter, Fimbulvetr. Three winters in a row follow one another, without alternating summer; snow is everywhere, fierce winds are blowing, severe frosts persist. This leads to the destruction of relationships between people.

The world is heading towards chaos. Before humanity falls into civil war, other signs of the end times, called by the prophets, will appear.

Deep in the Forest of the Hanged, a rooster with red plumage will crow. Another will sing in the Iron Forest, where the troll feeds the offspring of Fenrir, and the wolves are chasing the moon and sun.

A terrible moment comes when the Sun will be swallowed up by the greedy mouths of animals and the world will plunge into darkness.

Popular Scandinavian Myths: from Odin to Game of Thrones