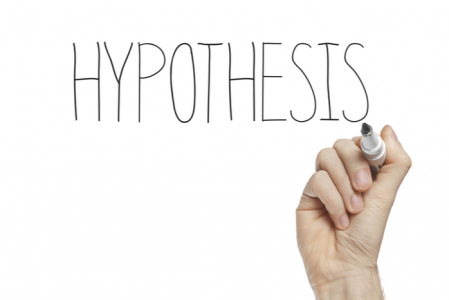 Often students confuse theory and hypothesis, speaking of a theory as something that needs proof. In science, a good theory is always based on a hypothesis, which has already been proved right many times. However, not all hypotheses lead to theories, as researchers may prove them to be right or wrong. At the end of the day, a hypothesis turns out to be a key methodological element of research…

What Is a Research Hypothesis?

In simple terms, a research hypothesis is a statement, in which the researcher assumes the existence of a relationship between several variables. It is an “if-then” statement, frequently talked about as an “educated guess”. A hypothesis is a predicted outcome of a study (or research). The task of the author of the hypothesis statement is to empirically prove or refute this statement.

Where Is a Hypothesis Placed in Research?

A research hypothesis is part of an introduction. It is often placed after the description of the goal and objectives and before the chapter dedicated to the research methods.

A scientific hypothesis in the introduction should only be noted, not solved. Therefore, it will be necessary to prove or disprove it after the performed research. A statement of a hypothesis should occupy not more than a paragraph of text. Therefore, it is important to correctly write a hypothesis so that it is understandable and logical to the readers (fellow researchers or the public).

How to Write a Hypothesis

It is necessary to consider a hypothesis according to two criteria:

One can say that a hypothesis is an assumption of a solution to a scientific problem or its mitigation. At the end of a thesis or coursework, a conclusion is made whether the hypothesis is true or not.

That is, using methods such as analysis, synthesis, or comparison, the researcher conducts a study and establishes whether the proposed hypothesis is true or false.

It is necessary to use your own guesses for the solution that appeared when you got acquainted with the problem. If there are no ideas, then it is recommended to write the theoretical and practical part first. This will help you better understand the problem under study and the subject of research.

Templates to Help Formulate a Hypothesis

Use the following templates to express your research hypothesis:

By its nature, a hypothesis can be revolutionary (putting forward something fundamentally new) or a modification of known laws, based on the assumption that some laws exist in areas where their effect has not yet been revealed.

According to the logical structure, hypotheses can be linear, when one assumption is put forward and tested, or branched when several assumptions need to be tested.

5 Easy Steps to Write a Hypothesis

Finally, here are 5 logical and easy steps to help you write a research hypothesis:

How to Write a Hypothesis in 5 Easy Steps